St Peter’s RC High of Orrell and Sirius Academy from Hull won the National Champion Schools Year 11 Finals on Tuesday in two grippingly tense, close-fought encounters. St Peter’s RC High overcame Castlefield Academy 36-26, after the Wakefield-based school had clawed the score back to 32-26 with five minutes to go. But man of the match Joe Shorrocks crossed the line on the final whistle to secure the title. 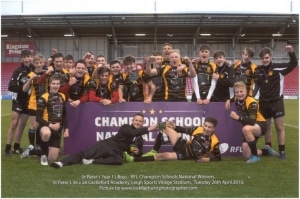 Castlefield Academy were also runners-up in the Girls Final, Sirius Academy winning their first ever schools title with a 30-22 victory that, like the Boys Final, had drama to the very last whistle. But hatrick hero and Player of the Match Kayleigh Waller led her team to a deserved victory. 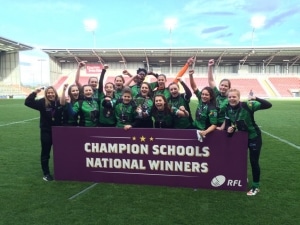 “From walking into the changing rooms to the pre-match meal and then walking out of the tunnel, it was an amazing experience for the players and coaching staff,” said Sirius Academy Head Coach Rachel Gay. “The girls were overwhelmed with the professional treatment they were given and it is something they will never forget. The pitch and stadium was spectacular and hopefully this venue can be used again for Finals.”

“I was really impressed by the standard of rugby,” added Leigh Sports Village Chief Executive Simon Toon. “LSV is a facility for all the community, of whatever age, so we were only too happy to host the finals on behalf of the RFL. Hopefully we’ll see some of these exciting young players gracing the LSV pitch again in the years to come.”