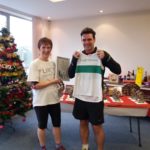 “We wanted to recognise Andy’s involvement in the original idea of the Sports Village and in particular his involvement and support for the Harriers throughout the negotiations,” said Chair Joe Galvin.

“His influence as a member of Parliament with the development of the Sports Village was invaluable and subsequently his idea for the Leigh School games at the Sports Village – involving a variety of sports including athletics – has become an annual event attracting over 1,000 school pupils each year.”

Mr Burnham was given a framed certificate and a Leigh Harriers club vest by Harriers Chair Joe Galvin and Club Secretary Angela Pike after the club’s annual Christmas Handicap race – in which he sportingly took part.

“Over my 16 years as an MP for Leigh, I developed a deep respect for the work of Leigh Harriers & Athletic Club and forged a close friendship with them,” said Mr Burnham.

“An Honorary membership of the club means a great deal to me and is something I will treasure. Leigh Harriers promotes a great community spirit both on and off the track, bringing people together from all backgrounds and abilities, promoting health and wellbeing and encouraging people to move more and get involved in physical activity, something I very much advocate as Mayor of Greater Manchester.”