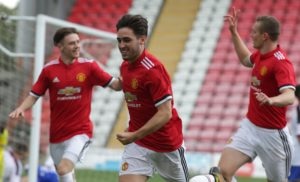 Leigh Sports Village is excited to announce that we will be hosting the eagerly-awaited Premier League U18s derby between Manchester United and Manchester City this Saturday.

Kick off is at 12 noon, and entry is free for all spectators. Click on the box below to register for the game and just turn up from 11am when turnstiles open in the Kingstone Press West Stand.

It’s certainly a match both United and City fans will look forward to. United’s U18s have been a pleasure to watch this season: sitting on top of the Premier League U18 North table, players like Tahith Chong and Angel Gomes have really caught the eye.