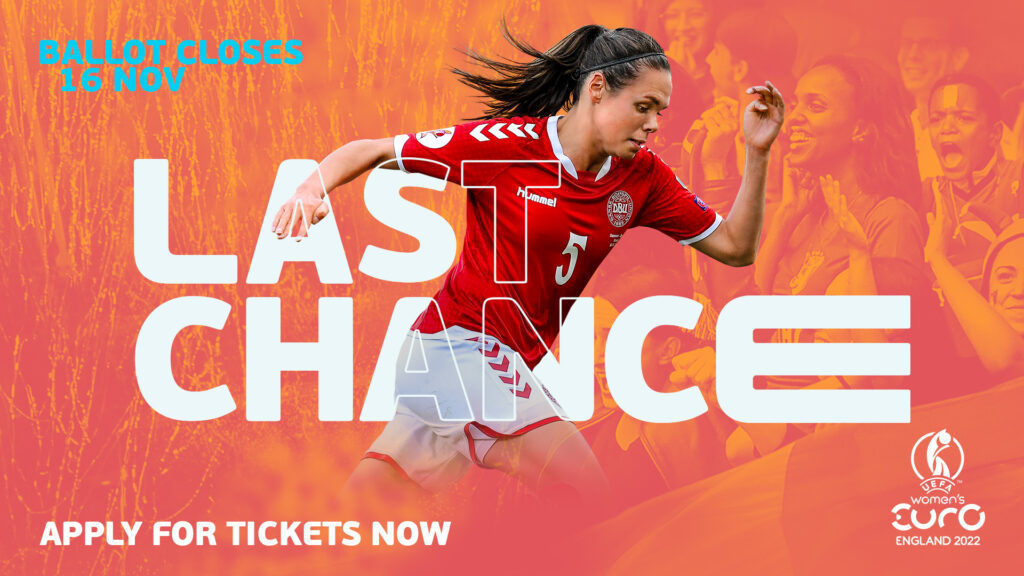 With just over 24 hours to go until the UEFA Women’s EURO England 2022 ticket ballot application window closes, the tournament has today revealed that over 200,000 tickets have already been applied for through the first ever ballot application process held for the women’s tournament.

The over 200,000 ticket applications, on top of the 162,000 tickets sold during pre-sale, have been applied for by a range of fans helping broaden the appeal of the sport even further. 47% of applicants are female and the average age range between 25 and 45.

The tournament is attracting fans from all over the world, with 15% of applicants international, coming from 114 different countries. Fans from each of the participating nations have been quick to purchase tickets and whilst host nation England comes out on top as applicants’ favourite nation, home nation Northern Ireland is currently listed as second, followed closely by the Netherlands and then Germany.

England games and the showpiece final are in huge demand with the final six times oversubscribed against the available quota. Currently 21 matches out of the 31 being played next summer will be requiring a ballot to determine ticket holders in at least one price category, with eight matches going to ballot across all price categories based on the number of tickets available at this phase, including all England fixtures.

But there’s still just over 24 hours to enter the ballot and be a part of history. Alex Scott, UEFA Women’s EURO 2022 Board Member said: “There are loads of sporting moments I wish I could’ve been at, such as Bolt’s first gold in Beijing or Emma Raducanu winning the US Open. This could be one of those history-making moments and tournaments, so we need to make sure people don’t miss out!

“I hope the knock-on effect of the tournament being so widely celebrated also has an effect on girls watching who want to be the next Lucy Bronze, Nikita Parris or even Pernille Harder – this is their chance to see these big stars in real life in a huge international tournament and know that they can actually be in their shoes one day. It is possible. The ballot to apply for tickets closes tomorrow – so people need to enter now!”

Fans are encouraged to maximise their chances of being successful through applying for multiple matches and with 31 matches across 10 venues in nine cities there are plenty of opportunities to be part of a huge summer for women’s football.

Nine host cities have been selected for the tournament including Brighton & Hove, London, Manchester, Milton Keynes, Rotherham, Sheffield, Southampton, Trafford and Wigan & Leigh. Women’s football’s most highly-rated stars will be on show with seven of the eight 2019 FIFA Women’s World Cup quarter-finalists taking part. Match ticket prices range from £5 to £50 with a family of four able to attend for £30, or £45 for England games, a semi-final or the final.

Demand indicators are outlined for each fixture on the ticketing portal, giving fans the opportunity to apply for tickets to matches with a greater chance of success in the ballot. Fans will be notified of whether their application for tickets has been successful by the end of the month.

Football legends Rio Ferdinand and Ian Wright took to social media last week alongside the stars of the tournament next summer including Vivianne Miedema and an array of top sporting names, such as James Haskell and Sam Quek, encouraging their followers to not miss out on applying for tickets. Video can be viewed here.