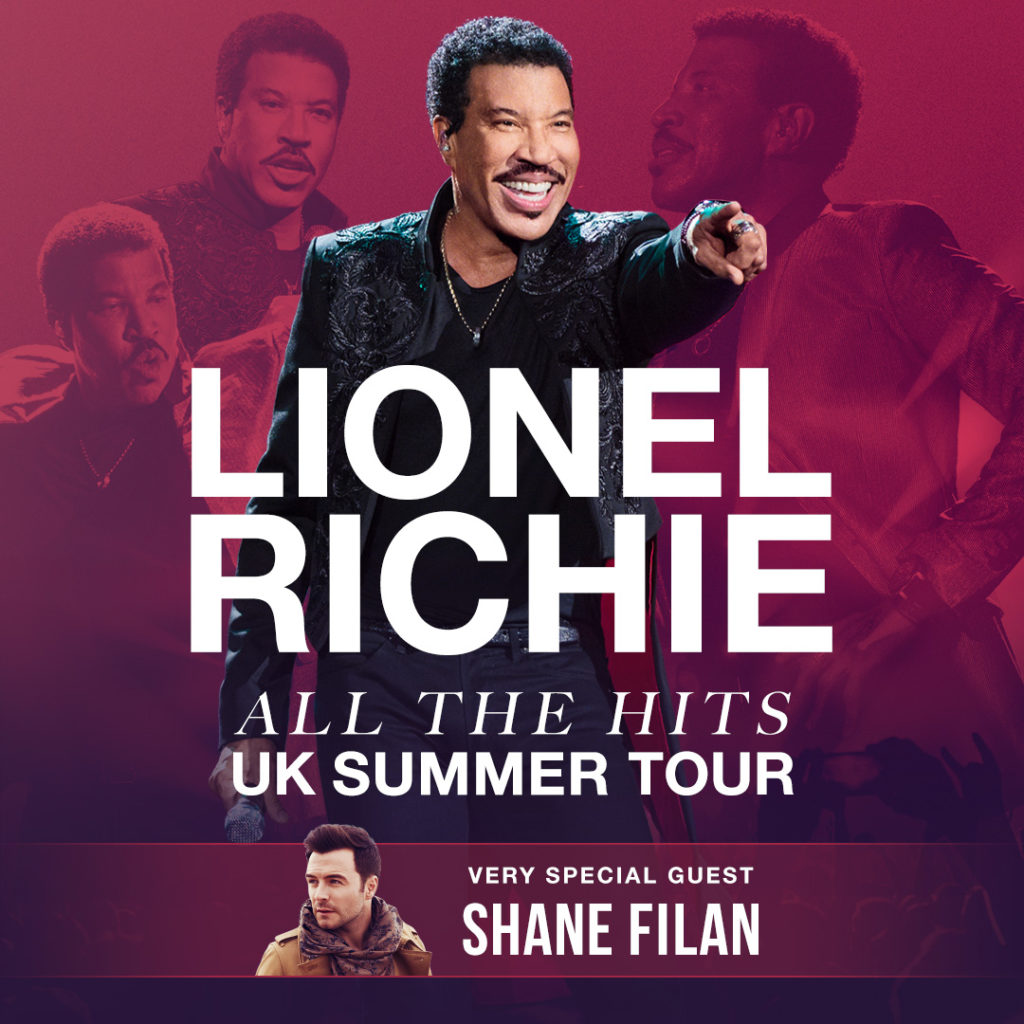 Not long now until Lionel Richie will be playing at Leigh Sports Village! So to get you in the mood, we’ll be counting down each day to his concert on Saturday June 16 with our favourite Lionel songs. Got a favourite? Let us know on Twitter or Facebook – and we’ll do the big reveal of the public vote the day before the gig!

It had to be No.1, didn’t it. All Night Long is absolute peak Lionel, a brilliant mix of soul, pop, calypso and dance. And it became a cultural phenomenon – he performed it at the Olympic Games in 1984, bizarrely it became a huge hit years later in Iraq (when US tanks rolled into Baghdad, the civilians were playing All Night Long from their houses and shops) and it was parodied on the Simpsons.

As for the famous “Tam bo li de say de moi ya, hey jambo jambo” line – don’t spend too long trying to work out what it means. Lionel made the words up . “Somewhere in that made-up language, I am actually saying something,” he told the New York Post. “Because even to this day, we’ll play India, and someone will tell me, ‘Yes, you’ve touched on certain words in [our language].’ As long as I am not cursing you out, I am going in the right direction.”

Lionel, with All Night Long, was definitely going in the right direction.

The inspiration for one of the most famous soft-rock ballads of all time? Lionel’s producer  James Anthony Carmichael came over to his house to talk about the follow-up to Three Times A Lady. “As he turned the corner to come into the room,” Lionel once explained, “I turned to him and said: ‘Hello, is it me you’re looking for?”‘

“He said: ‘Finish that song.”‘I kept saying to him, ‘You gotta be kidding me, right? I was just joking.’ He said, ‘No no, that’s incredible. Give me a verse to that.’ So I actually went in writing this song not liking the song, thinking that it was corny. ‘I mean, this is REALLY corny. This is not going to do well.”

Well, Lionel got that wrong. A number 1 in the US and UK, it also inspired the classic music video featuring Richie falling in love with a blind student sculpting a “likeness” of his head. Legend has it Lionel himself wasn’t particularly impressed with the finished result – but he was cut down by director Bob Giraldi saying: “Lionel, she’s blind!”.

Written for the Cold War movie White Nights, Say You Say Me won Lionel Richie his first (and only) Oscar for Best Original Song – not bad considering it was up against Huey Lewis And The News’ Back To The Future hit The Power Of Love and Phil Collins’ Separate Lives (also from White Nights).

It’s a proper 1980s slow-dance anthem too – all twinkling synths, crashing drums (eventually) and a soaring, arms swaying in the air chorus. And then, three minutes in, Say You Say Me completely changes tack into a completely different pop song for no apparent reason. All part of Lionel’s genius, and it went to No. 1 in America and hit the Top 10 in the UK in October 1985.

Remember this? After the success of Do They Know It’s Christmas for Live Aid in 1984, Lionel Richie and Michael Jackson got together to write a charity single for the American market. And not just any old dashed off song – featuring everyone from Tina Turner to Billy Joel, Bruce Springsteen to Bob Dylan, it became the fastest-selling pop single in American history.

Written in the Jackson family home, Lionel and Michael Jackson spent a whole week crafting the most catchy song possible, and then handed it over to the legends to sing. They were met at the recording studio by Stevie Wonder, who threatened that if the recording was not completed in one take, he and Ray Charles – two blind men – would drive everybody home...

There’s only one song we could choose for today – we’re Easy like Sunday morning with 6 days to go! Easy was written by Lionel for The Commodores in 1977 as a depiction of weekend life in the kind of small, quiet Southern American town he grew up in. “There is no such thing as four-in-the-morning partying in Tuskegee,” he joked.

A top ten hit in the US and UK, many credit the success of this soulful ballad for what would come next for Lionel Richie. And it’s true he has a song for most occasions. When you’ve been partying All Night Long, you definitely need to take things Easy the next morning – although the rocking Faith No More version of Easy might wake you up just a little more effectively!

Here’s a measure of how good Lionel Richie’s ballad with Diana Ross continues to be: in 2015, decades after it was released, Billboard called it the greatest song duet of all time.

Recorded as the theme tune for the Franco Zeffirelli film of the same name starring Brooke Shields, Endless Love was everywhere in 1981, earning Lionel Richie an Oscar nomination for Best Original Song, topping the charts in America for nine weeks and reaching No.7 in the UK. “Things got unbelievable,” Richie said later in 1982. “It was ‘Endless Love,’ endless award shows, endless everything.”

At a concert earlier in the current tour, he revealed that “One of my favourite songs to sing is ‘Endless Love’, and for 37 years I have asked Miss Diana Ross to sing it with me, and for 37 years she has said ‘no’. But I still ask her every time.” So in the meantime, he asks everyone in the crowd to be Diana and sing along. How can you resist?!

The follow-up single to All Night Long just had to be good – and luckily Lionel had an ace up his sleeve – an absolutely classic slice of 1980s pop from the moment the iconic synths (sampled by Rihanna in Push Up On Me) sweep into action. But it was also a (soft) rock song of sorts – Toto’s Steve Lukather lends a roaring guitar solo just over two minutes, making Running With The Night the perfect soundtrack for young kids in Ford Escorts driving round deserted nocturnal streets.

The video is a classic, too – directed by Bob Giraldi, he of Beat It fame – it’s got a proper story of our Lionel gatecrashing a wedding reception and heading off with the bridesmaid. All of which, naturally, propelled Running With The Night into the Top 10 in 1983.

Before Lionel Richie made his name as a solo artist he was of course one of the Commodores, the American soul-band who hit their peak in the late 1970s and early 1980s. Three Times A Lady was actually something of a new direction for the Commodores – before that point they were a funk, party band, but this incredibly smooth ballad – a waltz, in effect – took them to new heights, and the top of the charts all over the world.

Richie had actually written Three Times A Lady years before at university after hearing his father make a three-pronged toast to his mother, with the intention that someone like Frank Sinatra could sing it. But when his producer heard it, he said it could only be a Commodores song – and once it had become a smash hit, his father jokingly said he wanted royalties.

The second single from Lionel’s compilation album Back To Front (which we basically would like him play from start to finish on Saturday 16th), My Destiny was a jubilant return to soulful pop form after a five year break dealing with divorce, the death of his father and a throat problem that threatened to derail his career altogether.

Not that you’d know listening to My Destiny.  At the time, he called it “pure Lionel Richie” and it’s hard to disagree, not least because the video (by Like A Prayer-director Mary Lambert) has him dancing along in a jacket and tight strides… without a t-shirt on underneath. Classic – no wonder it reached No.7 in the UK charts.